Road Master Driving School
My Background
​My name is Dan Vieths (pronounced veets). As a teen, I saw driving as a means of exploration. I drove everywhere, just for the fun of it.  ​ Growing up in northern Wisconsin, I had a beautiful landscape to explore, and access to boats, a snowmobile, and my brother's dirt bike. And, once in a while my dad would take us to the gokart track in Spooner. Those experiences shortened my learning curve when I began learning to drive a car. They also became the foundation for my love of driving and the open road. 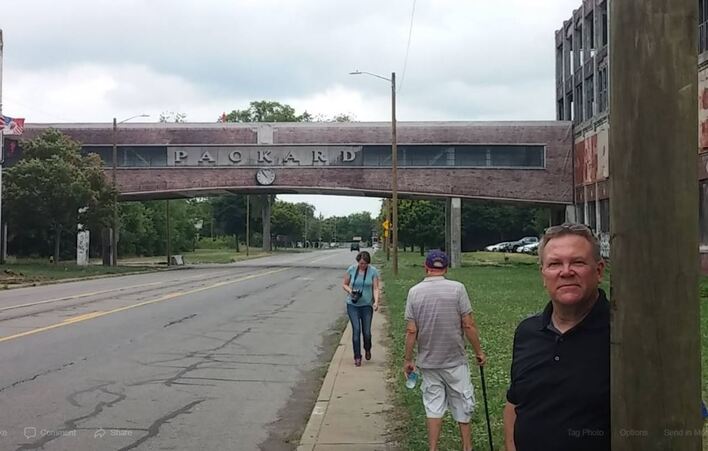 Left: I'm standing at the entrance to the old Packard plant, on East Grand Boulevard in Detroit.  Photo is from 2016. The famous skyway in the background collapsed on January 23rd of 2019.

This auto plant complex covers 40 acres. Beautiful Packards were built here, from 1903 through 1956. The exception was during WWII, when they made the Merlin engine which powered the P-51 Mustang fighter plane. In the mid-fifties, Studebakers were made here as well.
Today, I live in Eagan, Minnesota. During the day, I'm in the engineering world. In my spare time, I teach behind the wheel driving lessons to Dakota County teens and adults. In 2011 I became certified as a driver education instructor in Minnesota. This is an arduous process which includes multiple exams and tests, plus background checks. Armed with my certifications, I began working evenings and weekends as a behind the wheel instructor at a large Twin Cities  driver ed school. I call these large schools "factory driver ed", but nonetheless we need them. I worked with teens there and had great success with all students. But the owner had no idea what it was like to do the behind the wheel work. And, he had no interest in learning. He was focused instead on his shekels, and fretted that I was stopping at home to let the dog out (I don't have a dog). After two years of this drama and shady payroll stunts, I left to do my own thing. No more drama; just the satisfaction of teaching people to drive.

Road Master Driving School was launched in May of 2014. I now work with both teens and adults, with great success. Hundreds of my former students are safely plying the roads today. This equates to a sense of accomplishment unequaled in my daytime career. I became passionate about helping people learn to drive.  I feel strongly a behind the wheel instructor must approach the role with a combination of patience, understanding, empathy, and an aura of servitude.  This approach has facilitated a high success rate for me, if one measures that by successful road tests. My business is very small but I'm proud of this success.
Current Status
I continue to do this work, because I'm making a difference and still have passion for it. Behind the wheel instruction is intense, so I limit my lessons to weeknights and weekends. I'm the founder, owner, and instructor. I'm mom and pop without the mom, in other words. I don't advertise. Some find me on the net, but much of my business is referrals. My forte is nervous teens and adults who are relative newcomers to driving. There are many cases where I've taken a raw student (zero experience) and had them on the freeway within two hours.  Where the rubber meets the road, I put my instructor skills up there with anyone.  I can help almost anyone who seeks me out.

Instruction Philosophy
The massive factory-style driver ed schools often use lesson plans they found on the internet somewhere, and have boxes to check off, such as "six hill parks facing uphill", etc. etc. I don't have to follow stipulations set by someone sitting in an office. I have a general curriculum outline but I spend time on the necessary to safe driving and survival in any environment. My approach includes a mix of relaxing humor, one-minute lectures on the fly, and frequent discussions about awareness of surroundings, all interspersed among the two hours of driving per lesson. I tend to stress intersections and city driving more than highway driving. My experience leads me to believe this is where the vast majority of need lies. This is where the multitasking comes into play. Navigating intersections, lane changes, and leveraging mirrors to keep an eye on other drivers, how to finesse the gas and brake . . . all these skills add up to create a good driver. And then there's parallel parking and 90 degree backing. Unlike other schools, I touch on that each of the three lessons, so the student can master them instead of just being introduced to them. One could say then, that I teach to create a safe, competent driver but at the same time, I also teach to the test.