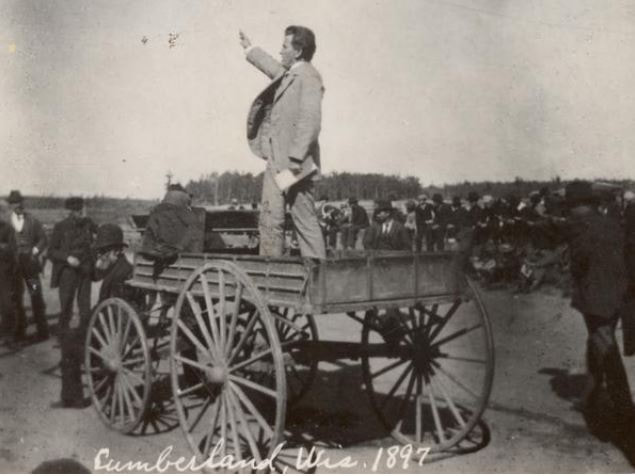 This is Bob La Follette in my home town of Cumberland, Wisconsin, preaching his fire and brimstone politics from the wagon which served as his soapbox. 'Fighting Bob' became governor of Wisconsin in 1900.
​
Photo courtesy of wisconsinhistory.org.
It's my website and my business, so I'm allowing myself a soapbox from which to preach. ​


Notes for Parents
Appointments, both behind the wheel sessions and road tests, are high value events in this dystopian era. If Johnny's hockey practice and Susie's part time job are more important than their driver ed training, that's your choice. But in that case you may find it's a matter of choices and priorities. The point is, sometimes families find themselves in a bind because the road test is three weeks away and their teen has been unable to finish behind the wheel lessons with giant XYZ Driving School.

That leads to my next point. The dirty little secret is that giant XYZ Driving School has a ton of customers but often not enough behind the wheel trainers. They don't tell you that up front, but they'll take your money anyway when you sign their contract. Their contract may expire in a year but after a month some discover it'll take over a year for Susie to complete the required six hours. Panic ensues. Then there's a frantic hunt for another behind the wheel provider. That's when some of these families come to me. I can help them but sadly, they almost always forfeit the big package fee they gave to the giant XYZ Driving School. Well, my schedule is right here in this site for all to view. If you see open time slots you like, you can sign up and be done soon. I have finished the six hours with some teens in as little as a couple weeks, and I don't ask for payment until we're all done. Here's a tip for all families: get the behind the wheel sessions finished and get that 'white card'. Then make the road test appointment.

The Politics of Energy and Raw Materials
In January of 2021 we were exporting oil, and gas was $1.90 per gallon. That was all by design. But the crew now occupying the White House was very clear at the outset about waging war against fossil fuels. They've been true to their word, despite the fact that oil and gas are the lifeblood of the nation, even the world. This is ever more apparent as we now see the Germans are foraging for wood as heating season approaches. The US did a 180 degree turn on 1/21/21 and now, with gas prices at unprecedented highs and runaway inflation, the White House wants to blame others for the consequences of their actions.

​"The sowing is not as difficult as the reaping."

Looking upstream in the process of building one EV battery, an average of 500,000 pounds of the earth's crust must be mined. The energy equivalent of 100 barrels of oil is then needed to manufacture one car battery, once the needed minerals are on hand. All of this to create one battery, capable of storing the energy equivalent of only one barrel of oil. *